NAAC is committed to provide efficient and effective methods of giving back to our communities.

MST system: The next generation in pasteurisation

Nu Agri Asia brings Millisecond technology (MST) to F&B manufacturers in the Philippines and the rest of the Asian region.

The current coronavirus pandemic is a wake-up call to the world, in which we were unprepared for the effect of this deadly virus. As nations scramb...

Dairy plant Vaquería Tres Monjitas announced a $7.5 million investment in its operations to launch a new fresh milk product that will have a...

Dairy plant Vaquería Tres Monjitas announced a $7.5 million investment in its operations to launch a new fresh milk product that will have a shelf life of more than 30 days.

In doing so, it will become the first dairy producer in the world to use cutting-edge technology to extend the life of a highly-perishable product.

Starting in May, the company will introduce the dairy product in whole fresh milk varieties, 2% reduced-fat, 1% low-fat and fat free, in 59-oz. carton packs.

The company’s investment included the acquisition of exclusive rights for Puerto Rico and the U.S. Virgin Islands of the Millisecond Technology to develop the product line that also includes specialized fortified milk with 67% more calcium than non-fat whole milk, in addition to 2% reduced-fat chocolate milk in 32-ounce packages.

This allows the flavor of fresh milk and all its nutrients to be maintained, while eliminating all bacteria and microorganisms that affect its durability.

“For 101 years, Tres Monjitas has been an integral part of the local dairy industry and Puerto Rican families, by producing and distributing dairy products of the highest quality,” said Jaime Fonalledas, president of Vaquería Tres Monjitas.

“That same quality, recognized by our corporate customers and consumers, we now add the factor of greater durability, to provide a fresh milk product superior to that we know now,” he said, adding the company is starting “the celebration of our second centenary, with the most important innovation in the industry since they awarded the Grade A classification to milk produced in Puerto Rico.”

MST is a technology developed by the group of engineers from JCS Systems in coordination with the Integrated Food Manufacturing Center of Purdue University’s Food Science Department.

The technology has been in testing and validation for more than 15 years and Puerto Rico has now become the first market in the world to use it commercially, Vaquería Tres Monjitas officials said.

The implementation of MST technology will “transform Puerto Rico’s the dairy industry, which from now on will produce traditionally imported products,” executives said.

“This will allow us to grow the market, by selling in the USVI, continue to innovate with new fresh milk products and close the door to the import of this product since the technology is exclusive to Tres Monjitas,” said Jaime Luis Fonalledas, executive vice president of Tres Monjitas.

Meanwhile, the company’s General Manager, Orlando González-Núñez, said “this launch is the result of teamwork during more than 18 months in which we were backed by not only with the support of our more than 500 employees, but also from suppliers and business partners who have contributed their knowledge and experience to make possible the launch of this product in Puerto Rico before any other market.

On August 30, 2019, Nu Agri Asia and JCS Process & Control Systems signed a Contract whereby Nu Agri Asia will provide JCS Aseptic and Product Standardizing Systems to the Asian Market. This will include line expansion to existing plants, as well as four large scale new plants that are in various stages of development. The contract was signed by the CEOs of the two companies. Left on the picture is Dan Baron, CEO of Nu Agri Asia and right is Philip R Frechette, CEO of JCS Process & Control Systems. The signing was executed just following three days of successful meetings with the movers and shakers of the International Coconut Markets at the 2nd World Coconut Congress in Manila Philippines. 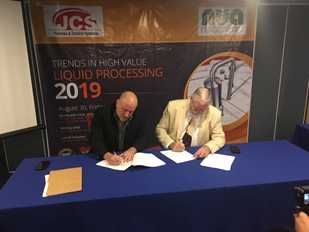 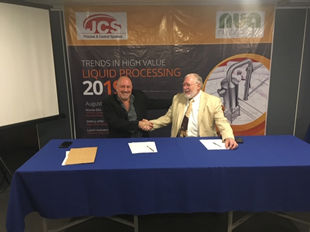 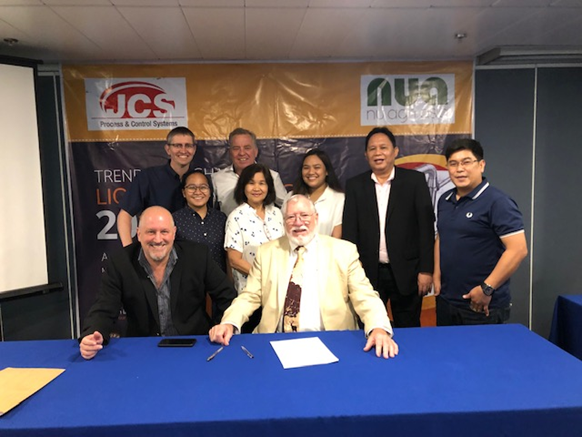 Nu Agri Asia and JCS Process & Control Systems personnel pose for a photo just after the execution of the contract in Manilla Philippines August 30th, 2019.

The current coronavirus pandemic is a wake-up call to the world, in which we were unprepared for the effect of this deadly virus. As nations scrambled to fight the virus, the issue of food security has become evident—and there needs to be a better solution!

According to the Food and Agriculture Organization of the United Nations (FAO), “both lives and livelihoods are at risk from this pandemic [and its aftermath]. This is no longer a regional issue—it is a global problem calling for a global response. We risk a looming food crisis, unless measures are taken fast to protect the most vulnerable, keep global food supply chains alive and mitigate the pandemic’s impacts across the food system.”

The FAO continues, “Border closures, quarantines, and market, supply chain and trade disruptions could restrict people’s access to sufficient/diverse and nutritious sources of food, especially in countries hit hard by the virus or already affected by high levels of food insecurity. There is particular concern about this pandemic’s impact on vulnerable communities already grappling with hunger or other crises – the Desert Locust outbreak in the  Horn of Africa, for example – as well as countries that rely heavily on food imports, such as Small Islands Developing States, and countries that depend on primary exports like oil.”

Further, “these vulnerable groups also include small-scale farmers and fishers who might be hindered from working their land and fisheries. They will also face challenges accessing markets to sell their products or buy essential inputs, or struggle due to higher food prices and limited purchasing power. Informal laborers will be hard hit by job and income losses in harvesting and processing. Millions of children are already missing out on the school meals they have come to rely upon, many of them with no formal access to social protection, including health insurance.”

Protecting Farmers At All Costs

Many farmers in the country have lost their entire harvest due to the Pandemic outbreak.  Roads and markets have been slow to react, and consumers have switched much of their buying to canned, shelf-stable and comfort foods instead of fruits and vegetables.  In crisis, the case for the Philippine farmer is weakened and in some cases their livelihood is lost forever.

“As countries worldwide are trying to cope economically and prioritizing for themselves, Filipino businessmen have urged government to refocus growth strategy on the domestic market and aim for food security”, the Philippine Chamber of Commerce (PCC) said on April 13, 2020. Aside from infrastructure support that include farm-to-market roads, irrigation, post-harvest facilities and other related projects, “agriculture and aquaculture sectors must be provided input subsidies and access to research and development and technologies.”

Emphasis must be made on providing a “buffer zone”, an area where farmers can bring their harvests, in good times and bad, to process them into long-life finished goods.  This will completely alleviate the waste in farm harvests due to shifts in demand and market access.

“A paradox of global hunger is that, despite their activity, smallholder farmers in the rural areas of developing countries are disproportionately at risk of food insecurity themselves, with low incomes a major reason for that”, according to FAO. “It would be tragic if that problem were to be exacerbated, and their ability to produce food reduced, at a time when we are trying to make sure that food supply remains adequate for everyone.”

So policy makers must pay attention to them! “What we know - and we saw it during lockdowns in West Africa during the Ebola crisis - is that restriction of movements and road closures curb farmers' access to markets both to buy inputs and sell products. They also reduce the availability of labor at peak seasonal times. The result is that fresh produce can accumulate without being sold, leading to food losses, while those who grow it lose income. Another point here is that what we have seen so far is a spate of exceptional purchases of non-perishable foodstuffs. In Italy, demand for flour has spiked by 80 percent. Canned goods are all the rage. Yet, due to psychology and the restrictions on movement, it's proven harder to sell fresh produce and fish, both of which are harder to store for future consumption.”

A Consulting firm dedicated to the premiumization of coconut products, natural and organic fruit beverages, dairy and snack items.